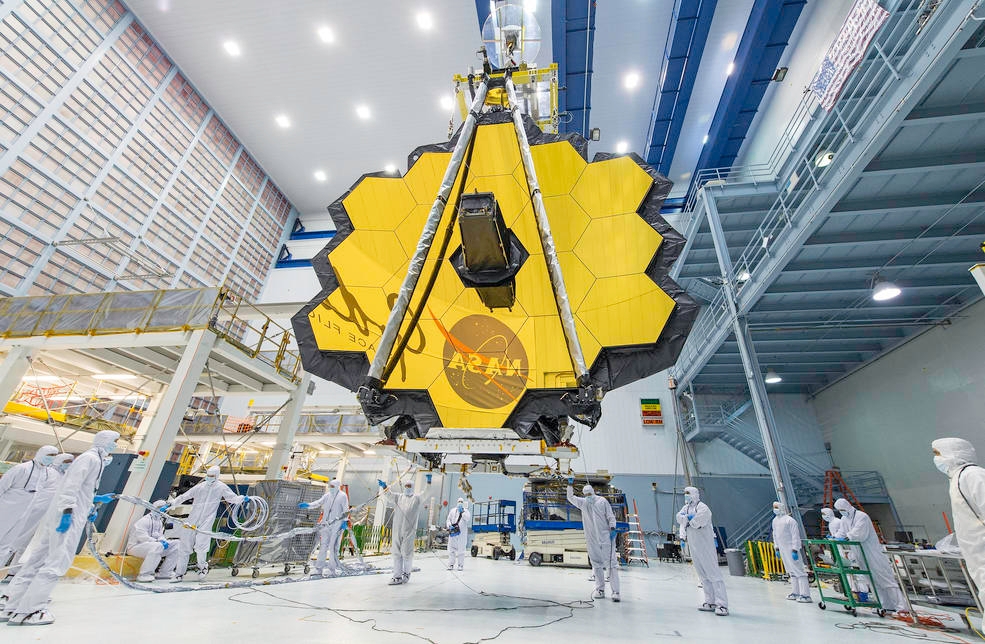 For the last 20+ years, NASA’s been building the most powerful space telescope EVER, and it’s almost ready for launch! The James Webb Space Telescope is expected to snap the most detailed images of the universe ever taken. It could teach us about the universe’s very first stars, galaxies far, far away, and could even help us find alien life! To celebrate the launch, we collected some awesome Webb Space Telescope fun facts and stellar space activities for you to do with the kids at home!

Webb will succeed the Hubble Space Telescope, which has been in orbit since 1990. With its 8 foot (2.4 meter) primary mirror, Hubble has snapped some of the most iconic celestial images, like the Pillars of Creation and the Hubble Ultra Deep Field.

Webb is even bigger than Hubble! The whole telescope is as tall as a 3-story building and as long as a tennis court. To fit this giant into a rocket for launch, engineers had to fold it up like origami.

Get up close and personal with Webb’s design using this printable coloring page from NASA & Ball Aerospace.

Explore rockets (like the one launching Webb) with this Bottle Rocket project from the KiwiCo Store.

Webb will allow scientists to image planets in distant solar systems (also called exoplanets) directly—something we aren’t able to do with our current telescopes. This new data would help us determine if the planets are supporting life!

Webb will also be able to look at the planets in our own solar system in greater detail, including the spots we think are capable of harboring life. Learn more about our solar system with this one you can make out of pom-poms!

Design Your Own Exoplanet

Invite your child to imagine what a distant planet might look like with this fun DIY planet banner!

Explore our solar system more & learn what it takes to be an astronaut with our Astronaut Starter Kit from the KiwiCo store!

Space telescopes use mirrors to collect and focus light from distant stars. Webb has 18 small mirrors that fit together into one giant mirror. The mirrors are coated in gold to help reflect infrared light!

Build Webb’s Mirror at Home
Build your own version of Webb’s mirrors at home with this activity from NASA & Ball Aerospace!

Learn more about the science of mirrors & reflection with our Kaleidoscope Play project from the KiwiCo Store.

This can be hard to wrap your brain around, but space telescopes are kind of like time machines. Since it takes time for light to travel to earth, when we look at stars that are really far away, we’re actually seeing what they looked like in the past! Scientists are hoping Webb will be able to see so far, it will actually see the very first stars and galaxies that formed at the beginning of the universe.

Create your own stars at home with this DIY constellation jar!

Invite your child to create their own rendering of the first stars and galaxies with our Galactic Glow Art project from the KiwiCo Store.

The Hubble Space Telescope orbits about 350 miles (570 km) from Earth, which means light from the Sun and the Earth itself can get in the way of its measurements. That’s why NASA is sending the Webb Space telescope nearly 3 times farther! This great distance will result in better data & images.

Learn more about satellites by building your own with this fun, virtual game from NASA!

Make your very own rocket out of clay at home with this simple DIY! Can you build one that can take Webb into outer space?

Did you know we have original KiwiCo videos all about space? Check them out on YouTube!

See all from STEM ➜